Your heart can be empty because you can’t see them, or you can be full of the love you shared.

You can turn your back on tomorrow and live yesterday, or you can be happy for tomorrow because of yesterday.

You can remember only that they are gone, or you can cherish their memory and let it live on.

You can cry and close your mind and feel empty, or you can do what they would want.

“Years ago, anthropologist Margaret Mead was asked by a student what she considered to be the first sign of civilization in a culture. The student expected Mead to talk about fishhooks or clay pots or grinding stones.

“But no. Mead said that the first sign of civilization in an ancient culture was a femur (thighbone) that had been broken and then healed. Mead explained that in the animal kingdom, if you break your leg, you die. You cannot run from danger, get to the river for a drink or hunt for food. You are meat for prowling beasts. No animal survives a broken leg long enough for the bone to heal.

“A broken femur that has healed is evidence that someone has taken time to stay with the one who fell, has bound up the wound, has carried the person to safety and has tended the person through recovery. Helping someone else through difficulty is where civilization starts, Mead said.

We are at our best when we serve others. Be civilized.

Shared from a Facebook Post because it is yet another beautiful and telling description of how Johnnie Bakkum lived her life to serve others and model civility. How many times—whether physically, mentally, emotionally or spiritually—did Johnnie stay with the one who fell, bind up the wound, carry the person to safety and tend the person through recovery?

Thank you, God, for blessing our congregation with Johnnie Bakkum.  May we pass along her good works and caring spirit to those with whom we interact each day.   In Jesus’ Name. Amen. 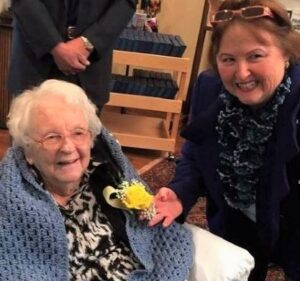 Johnnie Bakkum, left, with Mary Hubbs before Johnnie moved to Beaufort, S.C., to be near her daughter Catherine. Johnnie’s other children are Caren, Carlton and Leila.

Recently, I was asked to preach about the concept of Sanctuary, a word that has dual meaning. Today, we tend to think of The Sanctuary as the room in the church in which we worship God. In times past, the word Sanctuary simply meant a place of safety, which prompts the question, Is our sanctuary a safe place? We know the world around us can be unsafe in terms of danger, disease, and disagreements. So, perhaps we can offset that by committing to make ourselves a Sanctuary for others, that is, a safe person. Before, during, and after worship, may the words to this chorus be both our anthem and our prayer: “Lord, prepare me to be a Sanctuary, pure and holy, tried and true. With thanksgiving, I’ll be a living Sanctuary for you.” Amen.

The Rev. Cyndi Parr served as Interim Pastor of First Presbyterian Church of Dalton, GA between 2013 and 2014. 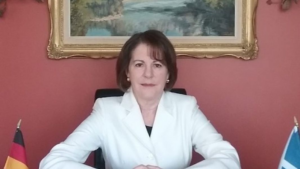 Starting this month, the Midweek Meditation will feature thoughts written by some of the pastors who have been associated with our church in various ways.

Honestly, there are probably very few people in Dalton, GA, who would be interested to hear First
Presbyterian Church’s answer to the question Jesus asked his disciples, ”Who do people say that I am?”
The first disciples answered, “John the Baptist raised from the dead, Elijah, or one of the other
prophets.”

There might be more people in Dalton, GA, who would be interested to hear First Presbyterian
Church’s answer to the follow-up question, which Jesus asked his disciples, ”Who do you say that I
am?” And so, you are invited to meditate on the second question. To provoke your thought, you are offered the answer that one twenty-first century Christian gave to the second question.

Marcus Borg (1942-2015), New Testament scholar and author, was asked on the “Today Show” on
Good Friday 1995 to state in a minute and fifteen seconds (his interview time slot) “What was Jesus
like?” Here is his response:

Jesus was from the peasant class. Clearly he was brilliant. His use of language was remarkable
and poetic, filled with images and stories. He had a metaphoric mind. He was not an ascetic, but
world-affirming, with a zest for life. There was a sociopolitical passion to him,—like a Gandhi or a
Martin Luther King, he challenged the domination system of his day. He was a religious ecstatic, a
Jewish mystic, for whom God was an experiential reality. As such, Jesus was also a healer. And there
seems to have been a spiritual presence around him, like that reported of St. Francis or the present
Dalai Lama. And as a figure of history, Jesus was an ambiguous figure—you could experience him and
conclude that he was insane, as his family did, or that he was simply eccentric or that he was a
dangerous threat—or you could conclude that he was filled with the “Spirit of God.” (cited in Jesus:

Uncovering the Life, Teachings, and Relevance of a Religious Revolutionary, by Marcus J. Borg,
copyright 2006)

Dr. Borg was a professor at Oregon State University, whose scholarly focus was the person, Jesus, in
history. At the same time he was an active lay member of the Christian Church, who affirmed the core
doctrinal teachings of the Church. He, nevertheless, observed that the Church’s understandable
emphasis on a doctrinal interpretation of “who Jesus was and is,” has had an unfortunate consequence of lessening the possibility for people to appreciate the truly remarkable historical figure, whom Jesus was.

What do you think? Might there be people in Dalton, GA, who would like to hear First Presbyterian
Church’s answer to Jesus’ question to his first disciples: ”Who do you say that I am?”

You are invited to meditate on your answer to the question, which Jesus asked those who would follow
him.

Submitted at our request by The Rev. Dick Neelly, First Presbyterian Church of Dalton Interim Pastor in 2006-07.

WHEN WE CANNOT FIND THE WORDS

The disease had reduced his voice to a faint whisper, so when he made the effort to speak, it was about something important. “I’m having a hard time praying,” he said.  “I start to pray and then I…I just can’t finish.  I can’t put my thoughts together or something.

There was silence around the bed for a time, and then an older friend asked how long he had been married.  I was bothered that the man seemed to be changing the subject, avoiding something we needed to talk about and to help with if we could.

“And you know how Jenny sometimes finishes your sentences?”

There was a warm and knowing smile and a nod from the bed.

“Well,” said the older fellow, “God has known you even longer than Jenny has.  You just start the sentence…and God can finish it.”

Used with permission from the author, our own Walter M. Jones, and taken from his book, Light Shining Through.