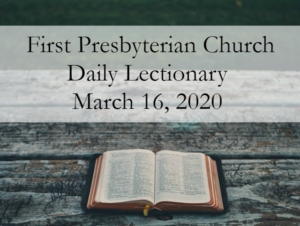 21When Jesus had crossed again in the boat to the other side, a great crowd gathered around him; and he was by the sea. 22Then one of the leaders of the synagogue named Jairus came and, when he saw him, fell at his feet 23and begged him repeatedly, “My little daughter is at the point of death. Come and lay your hands on her, so that she may be made well, and live.” 24So he went with him.

And a large crowd followed him and pressed in on him. 25Now there was a woman who had been suffering from hemorrhages for twelve years. 26She had endured much under many physicians, and had spent all that she had; and she was no better, but rather grew worse. 27She had heard about Jesus, and came up behind him in the crowd and touched his cloak, 28for she said, “If I but touch his clothes, I will be made well.” 29Immediately her hemorrhage stopped; and she felt in her body that she was healed of her disease. 30Immediately aware that power had gone forth from him, Jesus turned about in the crowd and said, “Who touched my clothes?” 31And his disciples said to him, “You see the crowd pressing in on you; how can you say, ‘Who touched me?'” 32He looked all around to see who had done it. 33But the woman, knowing what had happened to her, came in fear and trembling, fell down before him, and told him the whole truth. 34He said to her, “Daughter, your faith has made you well; go in peace, and be healed of your disease.”

35While he was still speaking, some people came from the leader’s house to say, “Your daughter is dead. Why trouble the teacher any further?” 36But overhearing what they said, Jesus said to the leader of the synagogue, “Do not fear, only believe.” 37He allowed no one to follow him except Peter, James, and John, the brother of James. 38When they came to the house of the leader of the synagogue, he saw a commotion, people weeping and wailing loudly. 39When he had entered, he said to them, “Why do you make a commotion and weep? The child is not dead but sleeping.” 40And they laughed at him. Then he put them all outside, and took the child’s father and mother and those who were with him, and went in where the child was. 41He took her by the hand and said to her, “Talitha cum,” which means, “Little girl, get up!” 42And immediately the girl got up and began to walk about (she was twelve years of age). At this they were overcome with amazement. 43He strictly ordered them that no one should know this, and told them to give her something to eat.

Jesus heals both the daughter of the synagogue leader and the woman who sneaks up behind him. We can imagine doing the same. All over the world there are people praying for something: praying for life, praying for a cure, praying for an end to illness, praying for an end to heartbreak. Sometimes it feels like the people of Jesus’ day were the lucky ones; they were the ones who could invite Jesus to their home or grasp at his cloak. Maybe we think that we could get what we needed if we had the same opportunity. But it’s not just the physical presence of Jesus that makes a difference. Here’s what Jesus says: “Daughter, your faith has made you well; go in peace, and be healed of your disease” and “Do not fear, only believe.” Jesus commends faith and belief. This isn’t just a simple equation, however. This doesn’t mean that we always get an end to our illness or our heartbreak based on same innate capacity for belief. Jesus assures us that the healing we ultimately receive is a gift from God. Faith and belief have their object in Jesus Christ. The same God who came as Savior to Israel is the same God who assures us of his Spirit and makes a way through death on the other side of the cross. This is the one who hears our prayers. How will he not answer?

Gracious God, in the compassion of Jesus you come to us in places of pain and suffering. Be present to us again where we need it—in anxiety and hopelessness, in hardship and struggle, in illness and pain. We put our faith in you, trusting that, in Jesus Christ, you work all to the good of those who love you. We wait for you, Lord, trusting that you will work through our prayers on behalf of those who are silent, or who do not know you, in the confidence that you love them, too. We pray in Jesus’ name. Amen. 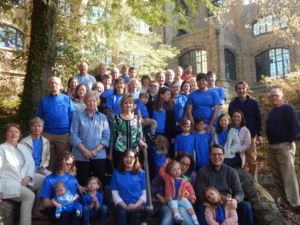 Here’s your special invitation to join our church family on retreat.

M is for mountains.  Lots of them all around.  Great for hiking or viewing and finding inspiration in the wonders of creation.  The stream flowing by, the children’s park, that cozy chair overlooking the lake – all of these in the unique freshness of spring in the forest will do your soul good.

O is for out-of-town with friends and away from the stresses and strains.  Oh, how nice to have God-time and personal time!  And, yes, there is childcare!!!

T is for theme:  “God’s beautiful world” will speak to the nature we’ll explore and to the environment we must protect.   Laurel and early rhododendron will dot the woodland as we roam and reflect on earth’s pleasures and perils.

R is for “room in the Inn.”  (Sounds absolutely biblical.)  You’ll have comfy accommodations to fit your preferences, and we’ll share social and gathering spaces.  $150 for a family covers lodging and three meals, with single rooms even less.  Count in travel cost and meals out and you’ll see that the Fellowship Team is making our retreat so very affordable.

E is for each other.  We see each other on Sundays, but to really know one another takes time and opportunity.  Across the dinner table, on a walk, bargain hunting at the Tobacco Barn, touring Biltmore House, sharing a coffee while the kids sleep – such moments move us from acquaintance to appreciation and affirmation.

A is for Arts and Asheville.  Just 16 miles west of our retreat is the lively and charm-filled arts capital of the South.  No city of its size gets better press today, and for good reason.  What’s not to like!  You’ll have afternoons to explore and enjoy.

T is for teamwork.  Our congregation’s potential to serve more effectively is bolstered by a balanced diet of worship, work and play.  Come be part of all three!  Time together makes our ties stronger.

Cost: $150 for a family unit, which includes room for two nights, pizza supper Friday night and breakfast both days.

Accommodations: The rustic Inn will be the center of our activities, with rooms to suit your personal needs as well as meeting and social spaces for our group.

Deposits due: Please have your $50 into the office by February 11 to reserve a place and help us with planning.

Who has signed up: Check the growing list in the Commons and pay attention to the weekly announcements for more revelations.

Transportation: Whether carpooling or driving separately, the four hour ride to the woods of Montreat will help renew our appreciation for the garden of nature which surrounds us.

Program: Yes, there will be times of worship and learning, but we’ll have plenty opportunity to just “hang out” or explore sites of interest in nearby Black Mountain or the best of Asheville’s art and food scene.

Contacts: Leanna Granillo, Laura Goins and Jeane Jones can answer your questions and testify to the fun we’ll have together. 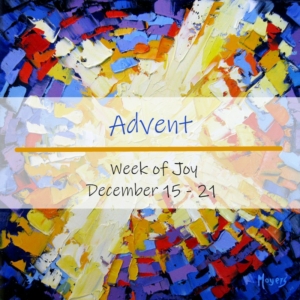 Once again we meet John the Baptist, who offers the same question to Jesus that we would—”Are you the one who is to come, or are we to wait for another?”

We’re in the season of waiting. We wait for holidays and celebrations; and we wait for earnings reports and test results. We wait for the good things that will enliven our holidays; and we wait for those things we worry will take away from any kind of joy we hope Jesus has come to bring. We have specific dreams in mind that we’re waiting for, those things we just know will make everything turn out alright. And then, we remember that the world doesn’t revolve around us and, thanks be to God, Jesus offers something more: “Jesus answered them, ‘Go and tell John what you hear and see: the blind receive their sight, the lame walk, the lepers are cleansed, the deaf hear, the dead are raised, and the poor have good news brought to them. And blessed is anyone who takes no offense at me.’” Why would we wait for anything else? 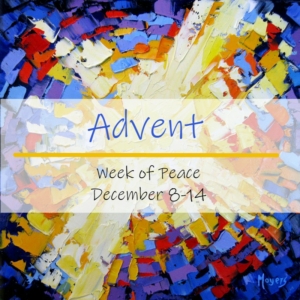 Every year John the Baptist shows up in our preparations for Christmas by calling us to repentance. The root of that word “repentance” means turning—now is the time to turn back to God. We do this through practice of scripture reading, prayer, and confession. We do this through worship and service. Above all we do this with God’s help. The prophets encourage us to turn because, in Jesus, God has promised to meet us in a new way. As we turn towards God, God is always turning towards us. 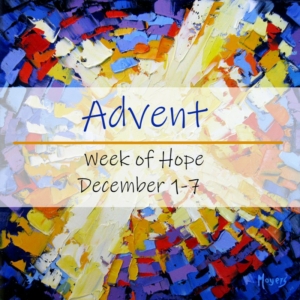 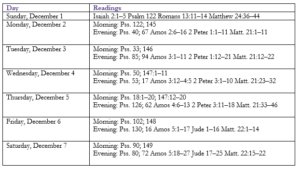 Jesus tells his disciples, “keep awake therefore, for you do not know on what day your Lord is coming.” Advent is the promise that God is coming in Jesus Christ in the midst of our lives of work and family, joy and grief, health and illness, hope and disappointment. We don’t always know what that looks like; and so Jesus’ promise is less a description of how this works and more an encouragement for our hope. We are people who live in light of this promise, who commit to practices of prayer, worship, and service, anticipating God coming into our midst. Jesus encourages us to watch and wait. How are you waiting? How are you preparing for God’s coming this year?