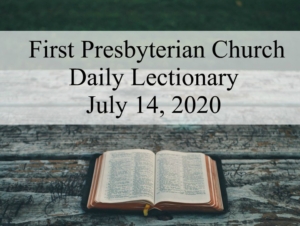 A parable that doesn’t make sense for a time that doesn’t make sense. This is one of the more challenging stories Jesus throws at his disciples. A master goes on a trip and leaves his slaves with talents—an astronomical amount of money. Two of the slaves grow the treasure. Another one buries it. While the first two slaves receive praise at the master’s return, the last slave receives the master’s anger, and loses the one talent that he has. On first reading this seems unfair. Isn’t the world’s trouble just this: that the rich receive more and the poor receive less? This story seems to upend the basic moral teaching the gospel having to do with shared resources. But the challenge of the parable isn’t that the master is harsh, as if God’s accounting of what we do with what we’ve been given will be exacting. On the contrary, the master is extravagant. What we miss in the parable is the extraordinary gift at the beginning. The accounting is done in talents. And, if we do the math, what we find is that the parable begins with the master handing over payment for roughly 150 years of continuous work among his three slaves. With all this generosity, why shouldn’t the master expect something more than a buried gift? The parable is meant to spur us. In the words of the poet Mary Oliver, “what is it you plan to do with your one wild and precious life?”

God, even in the stillness and smallness of these days, let your gift of grace grow within us, offering something of your extravagant generosity to the world you died to love, in Jesus Christ. Amen.