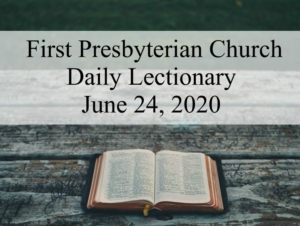 13For the promise that he would inherit the world did not come to Abraham or to his descendants through the law but through the righteousness of faith. 14If it is the adherents of the law who are to be the heirs, faith is null and the promise is void. 15For the law brings wrath; but where there is no law, neither is there violation.

16For this reason it depends on faith, in order that the promise may rest on grace and be guaranteed to all his descendants, not only to the adherents of the law but also to those who share the faith of Abraham (for he is the father of all of us, 17as it is written, “I have made you the father of many nations”) – in the presence of the God in whom he believed, who gives life to the dead and calls into existence the things that do not exist. 18Hoping against hope, he believed that he would become “the father of many nations,” according to what was said, “So numerous shall your descendants be.” 19He did not weaken in faith when he considered his own body, which was already as good as dead (for he was about a hundred years old), or when he considered the barrenness of Sarah’s womb. 20No distrust made him waver concerning the promise of God, but he grew strong in his faith as he gave glory to God, 21being fully convinced that God was able to do what he had promised. 22Therefore his faith “was reckoned to him as righteousness.” 23Now the words, “it was reckoned to him,” were written not for his sake alone, 24but for ours also. It will be reckoned to us who believe in him who raised Jesus our Lord from the dead, 25who was handed over to death for our trespasses and was raised for our justification.

It’s not too hard to be a believer when things are going well. Abraham show what happens when we believe against the odds. This is why Paul uses Abraham as THE example of faith in the Old Testament. Abraham received God’s promise that he would be the “father of many nations,’ even as he contemplated his own body which Paul describes in harsh terms as “as good as dead.” Do we believe even when there is nothing to hang our hope on? Will we hold onto God when everything else around us seems to be falling apart? If you do, then blessed are you, says Paul—because what you have isn’t just faith, it’s righteousness. You reflect something of God’s own life in you, because it is in God’s nature to bring life, even out of death. It’s why we have faith in the first place.

God, we believe. Help our unbelief—especially in those time when the world is confused or when you seem so far away. In all things, let your promise remain with us to be realized in our lives, as we reflect the life of Christ. Amen.