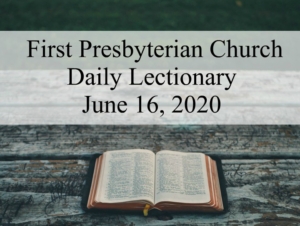 4The rabble among them had a strong craving; and the Israelites also wept again, and said, “If only we had meat to eat! 5We remember the fish we used to eat in Egypt for nothing, the cucumbers, the melons, the leeks, the onions, and the garlic; 6but now our strength is dried up, and there is nothing at all but this manna to look at.”

7Now the manna was like coriander seed, and its color was like the color of gum resin. 8The people went around and gathered it, ground it in mills or beat it in mortars, then boiled it in pots and made cakes of it; and the taste of it was like the taste of cakes baked with oil. 9When the dew fell on the camp in the night, the manna would fall with it.

10Moses heard the people weeping throughout their families, all at the entrances of their tents. Then the LORD became very angry, and Moses was displeased. 11So Moses said to the LORD, “Why have you treated your servant so badly? Why have I not found favor in your sight, that you lay the burden of all this people on me? 12Did I conceive all this people? Did I give birth to them, that you should say to me, ‘Carry them in your bosom, as a nurse carries a sucking child,’ to the land that you promised on oath to their ancestors? 13Where am I to get meat to give to all this people? For they come weeping to me and say, ‘Give us meat to eat!’ 14I am not able to carry all this people alone, for they are too heavy for me. 15If this is the way you are going to treat me, put me to death at once – if I have found favor in your sight – and do not let me see my misery.”

16So the LORD said to Moses, “Gather for me seventy of the elders of Israel, whom you know to be the elders of the people and officers over them; bring them to the tent of meeting, and have them take their place there with you. 17I will come down and talk with you there; and I will take some of the spirit that is on you and put it on them; and they shall bear the burden of the people along with you so that you will not bear it all by yourself. 18And say to the people: Consecrate yourselves for tomorrow, and you shall eat meat; for you have wailed in the hearing of the LORD, saying, ‘If only we had meat to eat! Surely it was better for us in Egypt.’ Therefore the LORD will give you meat, and you shall eat. 19You shall eat not only one day, or two days, or five days, or ten days, or twenty days, 20but for a whole month – until it comes out of your nostrils and becomes loathsome to you – because you have rejected the LORD who is among you, and have wailed before him, saying, ‘Why did we ever leave Egypt?'” 21But Moses said, “The people I am with number six hundred thousand on foot; and you say, ‘I will give them meat, that they may eat for a whole month’! 22Are there enough flocks and herds to slaughter for them? Are there enough fish in the sea to catch for them?” 23The LORD said to Moses, “Is the Lord’s power limited? Now you shall see whether my word will come true for you or not.”

It’s not just that we’re tired of doing the same thing, the same pandemic routine. One of the gifts of this time for me has been intentionally connecting with faraway friends. I’ve talked more with my friends from college and before more in the past three months than in the previous decade, almost. Yet even our conversations have turned the same—“what’s new?” “Not much.” It is a blessing to reconnect with friends. It is a blessing to be safe and well—all the things we take for granted. But no matter what we have it never feels like it’s quite enough, does it? This is what happens with Israel. The people yearned for freedom for four-hundred years. The current generation saw this freedom blossom with their own eyes as they escaped Pharaoh and crossed over the Red Sea. And even though they have been wandering through the wilderness for some time, God has fed them with bread from the skies. Not just freedom, but a divine provision beyond their imagination—and they’re still hungry for more. All of a sudden the past doesn’t look so bad. The blessing has become commonplace and stale. The people complain. Moses complains that the people complain. God’s anger burns such that part of the camp is consumed. The story puts our troubles into perspective. It doesn’t mean that they’re not there; but it does suggest that a prayer for the future might take a considered look at the past. If we expect to enjoy God’s blessing and promise in the days ahead, it’s helpful to remember what it looked like in the days behind. “Now you shall see whether my word will come true for you or not.” Maybe that’s not a statement about God’s intention to act, but a question of whether we might have the eyes to see it.

Holy God, you have given us our daily bread, and we have failed to be grateful. We thank you for who you are for us, above all for your gracious provision of love in our Savior, Jesus Christ. Give us an awareness of your abundance within our own lives, that we would have divine food to share with a hungry world, in Christ’s name. Amen.