Home/Uncategorized/Daily Lectionary – May 26, 2020
Previous Next 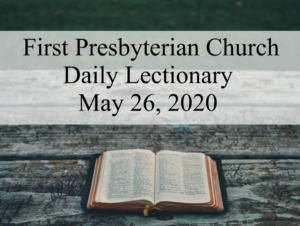 1The LORD said to Samuel, “How long will you grieve over Saul? I have rejected him from being king over Israel. Fill your horn with oil and set out; I will send you to Jesse the Bethlehemite, for I have provided for myself a king among his sons.” 2Samuel said, “How can I go? If Saul hears of it, he will kill me.” And the LORD said, “Take a heifer with you, and say, ‘I have come to sacrifice to the LORD.’ 3Invite Jesse to the sacrifice, and I will show you what you shall do; and you shall anoint for me the one whom I name to you.” 4Samuel did what the LORD commanded, and came to Bethlehem. The elders of the city came to meet him trembling, and said, “Do you come peaceably?” 5He said, “Peaceably; I have come to sacrifice to the LORD; sanctify yourselves and come with me to the sacrifice.” And he sanctified Jesse and his sons and invited them to the sacrifice.

6When they came, he looked on Eliab and thought, “Surely the Lord’s anointed is now before the LORD.” 7But the LORD said to Samuel, “Do not look on his appearance or on the height of his stature, because I have rejected him; for the LORD does not see as mortals see; they look on the outward appearance, but the LORD looks on the heart.” 8Then Jesse called Abinadab, and made him pass before Samuel. He said, “Neither has the LORD chosen this one.” 9Then Jesse made Shammah pass by. And he said, “Neither has the LORD chosen this one.” 10Jesse made seven of his sons pass before Samuel, and Samuel said to Jesse, “The LORD has not chosen any of these.” 11Samuel said to Jesse, “Are all your sons here?” And he said, “There remains yet the youngest, but he is keeping the sheep.” And Samuel said to Jesse, “Send and bring him; for we will not sit down until he comes here.” 12He sent and brought him in. Now he was ruddy, and had beautiful eyes, and was handsome. The LORD said, “Rise and anoint him; for this is the one.” 13Then Samuel took the horn of oil, and anointed him in the presence of his brothers; and the spirit of the LORD came mightily upon David from that day forward.

Israel wanted a king for a long time. Coming off of years of instability and tribal warfare, now Israel was a nation like other nations: consolidated and powerful, able to protect itself against its enemies. By the time of the reading today, however, the sheen has worn off of King Saul’s reign. He had begun to ignore the word of God coming from the prophet Samuel and it seemed like a return to the bad old days was just around the corner. But God doesn’t leave the people without hope for long: “The LORD said to Samuel, ‘How long will you grieve over Saul? I have rejected him from being king over Israel. Fill your horn with oil and set out; I will send you to Jesse the Bethlehemite, for I have provided for myself a king among his sons.’” Samuel goes to the house of Jesse to look for what’s next. He sees Jesse’s older sons, Eliab, Abidnadab, Shammah, and several others. They’re tall and strong. They probably look the part of kings (just like Saul did). But God reminds Samuel that he does not look on the outward appearance but on the heart. David, the smallest and the weakest, is the one chosen to be king.

We might expect Israel to have practice recognizing the way of God when Jesus comes along. Although David grew to be a great warrior, at this moment we see him anointed with God’s favor as a child—the least among seven brothers; in God’s economy, the weak defeat the strong, showing that the strength of God is beyond all human strength, or God’s wisdom beyond all human learning. We also see that this way takes patience. It’s likely some time before David fights Goliath and captures the notice of Saul. It’s even longer until he becomes king. And lest we think Israel’s problems were solved with the right person in charge, a look at II Samuel will remind us that problems still arise, even with God’s anointed in charge. So what do we do as we wait for God’s strange way of salvation? We renew something of expectation within ourselves. The exterior world will always present its challenges, but the Lord looks on the heart. We trust that God will right the wrongs of the world and restore creation; but in the meantime, maybe the kingdom begins within ourselves. We still might not have anything to “do” in this time, but maybe hope in God is work enough to fill a lifetime.

God, give us a Spirit of trust—of patience and peace, endurance and hope—as we wait on your promised salvation. Look on our hearts and restore us from within, that our days might be spent in expectation, looking for your Son among us, and your Spirit within. We pray in Christ’s name. Amen.