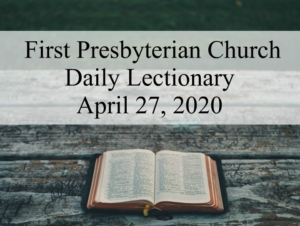 1An account of the genealogy of Jesus the Messiah, the son of David, the son of

3:1In those days John the Baptist appeared in the wilderness of Judea, proclaiming, 2“Repent, for the kingdom of heaven has come near.” 3This is the one of whom the prophet Isaiah spoke when he said, “The voice of one crying out in the wilderness: ‘Prepare the way of the Lord, make his paths straight.'” 4Now John wore clothing of camel’s hair with a leather belt around his waist, and his food was locusts and wild honey. 5Then the people of Jerusalem and all Judea were going out to him, and all the region along the Jordan, 6and they were baptized by him in the river Jordan, confessing their sins.

It’s worth reading through Jesus’ family tree so that we can remember his less than noteworthy ancestors. Although Jesus boasts patriarchs and kings among his forefathers, the family has plenty of black sheep, too. And, just as different people appear, so too do they appear in different times. Fourteen generations divide each of the groupings (six groups of seven, so that the seventh, inaugurated by Jesus, will manifest God’s completion of Israel). The first set begins with Abraham and ends with David—God’s promise culminating in a kingdom (though not without the struggle of slavery first). The second set traces the decline of Israel until the time of exile. The last set hints at restoration as it culminates in Jesus. The point is that there are black hats and white hats, all living in good times and bad. But t doesn’t matter whether the time is good or bad—eventually it comes to fruition in the work of the savior, who redeems it all.

Our time is in your hands, loving God. Use it as you will, to show your grace, to share your love, to spread your hope, until Christ comes again. Amen.