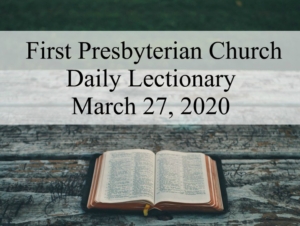 2Six days later, Jesus took with him Peter and James and John, and led them up a high mountain apart, by themselves. And he was transfigured before them, 3and his clothes became dazzling white, such as no one on earth could bleach them. 4And there appeared to them Elijah with Moses, who were talking with Jesus. 5Then Peter said to Jesus, “Rabbi, it is good for us to be here; let us make three dwellings, one for you, one for Moses, and one for Elijah.” 6He did not know what to say, for they were terrified. 7Then a cloud overshadowed them, and from the cloud there came a voice, “This is my Son, the Beloved; listen to him!” 8Suddenly when they looked around, they saw no one with them any more, but only Jesus.

9As they were coming down the mountain, he ordered them to tell no one about what they had seen, until after the Son of Man had risen from the dead. 10So they kept the matter to themselves, questioning what this rising from the dead could mean. 11Then they asked him, “Why do the scribes say that Elijah must come first?” 12He said to them, “Elijah is indeed coming first to restore all things. How then is it written about the Son of Man, that he is to go through many sufferings and be treated with contempt? 13But I tell you that Elijah has come, and they did to him whatever they pleased, as it is written about him.”

Mark, in typical fashion, cuts right to the point. We read the story of the Transfiguration in worship a little over a month ago (it seems longer ago than that). And so we know that this story is one of the things that confirms Jesus as special—the beloved Son of God. We know, too, how the disciples, as they are wont to do, botch the interpretation. They argue among themselves what the resurrection means. But Mark doesn’t linger with the disciples for long. They go down the mountain and Jesus makes the point explicit: that although he has been glorified, Jesus is preparing for his suffering and death. The glorification and the exaltation go hand in hand. That’s a hard thing for us to learn; because so often it’s when things are at their best that we tend to forget God. It’s the job or the relationship or even just the weather that, without gratitude, allows us to forget our fallibility or our potential for suffering. The irony of real struggle, then, is that’s when we are closest to God: because that’s where we recognize the truth about ourselves in our inability to control the world around us. Only the Creator can do that. And the Creator chose suffering as the way to redeem the world. Sometimes the hardship becomes a prelude to something better. That’s our hope, anyway.

Holy God, we pray for your appearing in places of pain and suffering and fear. We trust in you that, in your hands, what is broken becomes mended, and what is purchased by death is redeemed in your love. Come to us in just these places, that your hope would heal, and that your cross would mend suffering with the new life you bring, in your Son, Jesus Christ. Amen.