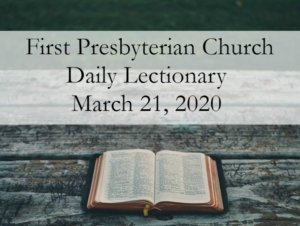 29When the time of Israel’s death drew near, he called his son Joseph and said to him, “If I have found favor with you, put your hand under my thigh and promise to deal loyally and truly with me. Do not bury me in Egypt. 30When I lie down with my ancestors, carry me out of Egypt and bury me in their burial place.” He answered, “I will do as you have said.” 31And he said, “Swear to me”; and he swore to him. Then Israel bowed himself on the head of his bed.

1After this Joseph was told, “Your father is ill.” So he took with him his two sons, Manasseh and Ephraim. 2When Jacob was told, “Your son Joseph has come to you,” he summoned his strength and sat up in bed. 3And Jacob said to Joseph, “God Almighty appeared to me at Luz in the land of Canaan, and he blessed me, 4and said to me, ‘I am going to make you fruitful and increase your numbers; I will make of you a company of peoples, and will give this land to your offspring after you for a perpetual holding.’ 5Therefore your two sons, who were born to you in the land of Egypt before I came to you in Egypt, are now mine; Ephraim and Manasseh shall be mine, just as Reuben and Simeon are. 6As for the offspring born to you after them, they shall be yours. They shall be recorded under the names of their brothers with regard to their inheritance. 7For when I came from Paddan, Rachel, alas, died in the land of Canaan on the way, while there was still some distance to go to Ephrath; and I buried her there on the way to Ephrath” (that is, Bethlehem).

Jacob shows us what it means to be near the end. He has lived to a ripe old age (147!) and gathers his children. Now is the time for Jacob to confer his blessing. But before he does that he makes future plans. What we think of as the end of Jacob is not really the end. We’ll take them in reverse—Jacob “adopts” Joseph’s sons. Even though they are Egyptian and born away from home, these two belong to God’s promise (anticipating the reception of that promise by those outside of Israel in the future). The other thing Jacob does is make provision for his burial. This is interesting, and maybe familiar. We’re used to the ones we love making plans like this—like a period at the end of a sentence, a firm end to a life. Yet at the same time Jacob’s request carries a promise. He wants to return home to the promised land: “Do not bury me in Egypt. When I lie down with my ancestors, carry me out of Egypt and bury me in their burial place.” Joseph promises, but he promises more than he knows. It will be four hundred years until that promise can come to fruition. In-between the promise and its completion are four hundred years of slavery and struggle in Egpyt. Jacob dies in Egypt, but he’s buried in Canaan. The newly-freed Israelites carry his bones through the wilderness. So when the scope of our time seems small, and the new normal doesn’t relent, we remember that God always provides something new. “The Lord is not slow in keeping his promise, as some understand slowness. Instead he is patient with you, not wanting anyone to perish, but everyone to come to repentance” (2 Peter 3:9).

God, we wait on the fullness of your promise. Give us that patient endurance which produces hope—that even in our waiting we would find your presence, which is the completion of all that we need, in Jesus Christ. Amen.